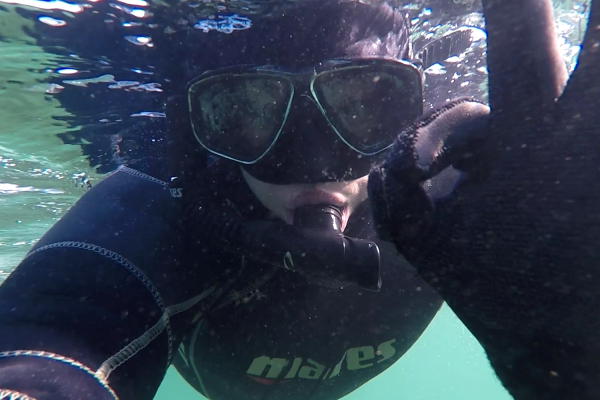 Every year from May-August a spectacular gathering occurs in the Upper Spencer Gulf, South Australia. Usually solitary, thousands of Giant Cuttlefish gather to breed in this one area making it the largest congregation of its kind in the world. Hear from an excited snorkeler who experienced this for the first time last season.

“After a short drive from Whyalla we squeezed into our thick wetsuits, boots, gloves and hoods, grabbed our snorkel gear and excitedly walked down to the rocky shoreline. It was a 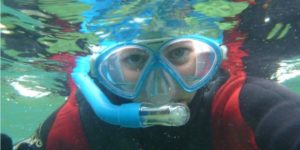 beautiful sunny winter’s day and the sea was calm. I wasn’t really sure what to expect and I have been on enough eco tours to understand that wildlife can be unpredictable and sometimes elusive. The first moment of submerging myself in the cool 12-15 degree water sure took my breath away but my thick wetsuit did its job and within a couple of seconds I was distracted because I spotted my first Giant Cuttlefish.

They are the largest of the cuttlefish species and can grow up to 5 kg and measure 60 cm. Some have described them as alien like creatures and it’s easy to see why. 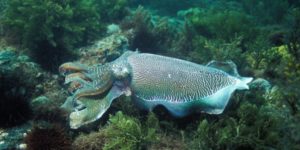 With long tentacles, W shaped eyes and skin that changes colour in an instant they are absolutely mesmerising. In just 2-3 metres of water they were all around me, some very well camouflaged in the weed and rocks and others pulsing with black and white stripes and flashing bright blue dots. Amazingly though they are actually colour blind! After a couple of minutes I started to relax and realised that the cuttlefish were not bothered by our presence at all. The changes in colour suggested they had just one thing on their minds- finding a mate. 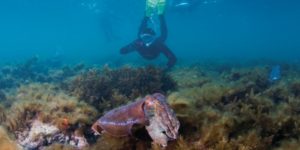 Males outnumber the females creating some fierce competition. The males show off with amazing displays of colour flashing different patterns and at times I could see two males next to one another measuring up to see who was the biggest. If you watch closely you might be lucky enough to spot a small male mimicking a female and using the disguise to sneak close to the female to mate. They have plenty of love to go around too as they have three hearts which pumps blue coloured blood around their bodies. After mating the female lays 100-300 eggs which she anchors in the rocky crevices then her job is done and she leaves them to grow.

The Upper Spencer Gulf is the perfect habitat for leaving her offspring as it provides abundant rocky ledges and shallow, protected waters. 3-5 months later the baby cephalopods will hatch and be carried off into the ocean 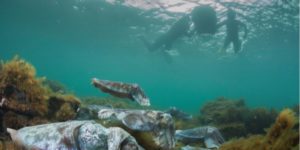 only to return for breeding when they are old enough. Swimming around in the cuttlefish’s garden watching these strange, intelligent creatures is something I will never forget. I won’t say anymore you will just have to come and experience this once in a lifetime marine spectacle for yourself!”